If you ever took a CPR class and found the old Resuci-Annie CPR dummies a little...creepy, the idea of a medical mannequin that can scream at you, move its eyes and deliver a moving baby may seem like the stuff of nightmares, but such a simulator provided important and realistic training for members of the Lincoln Volunteer Ambulance last weekend.

A mobile lab from the non-profit Simulation in Motion-Montana, Inc. made its first visit to Lincoln Saturday as part of the two-days of refresher training ambulance personnel are required to do every two years for their license renewals.

The SIM-MT labs are a relatively new resource that medical service organizations in Montana's smaller communities can take advantage of.

"We hit the road with them (on a) a whistle stop tour in October 2017," said Western Simulation Team Leader Brodie Verworn. Verworn works to operate the labs, which were funded by a one-time $4.6 million start up fund the state received from the Helmsley Charitable trust in 2016. The fund paid for three mobile labs, one each based in Kalispell, Havre and Bozeman, as well as initial set up and operating costs for the organization.

Each lab is staffed by a simulation team leader and two simulation specialists, all of whom who are trained medical personnel. Although they provide the voices of the "patients" and control their responses, they don't tell personnel what they need to be doing.

The SIM-MT labs, a sort of hybrid semi and RV, are set up in three sections. The rear of the lab is outfitted as an ambulance while the forward section has expandable pull outs that simulate an emergency room bay. A control center occupies the center section. The labs come equipped with hi-tech "dummies" including a female patient simulator - complete with newborn, umbilical and placenta for childbirth training - an adult male and a pediatric child simulator.

The labs are designed to provide realistic training using the "high fidelity" patient simulators, which can interact with medical personnel. Verworn said the dummies can simulate breath sounds, blood pressure and pulses, display vital signs and can be shocked using live defibrillators. Veworn said the childbirth simulator can even allow participants to feel contractions in the belly

The simulators also allowed Lincoln Ambulance personnel to use some of their own equipment such as heart monitors, which helps them maintain proficiency.

"They're going to use their cardiac monitors, it's going to read whatever cardiac rhythm we throw at them, in real time, just like you would a human," Verworn said.

Verworn worked with Lincoln Volunteer Ambulance President Aaron Birkholz on the objectives for the visit, which included cardiac arrest and delivering a child.

"The level here is at advanced EMT so we're not going to go over their heads with a bunch of stuff that doesn't apply to them," Verworn said "We want them to be able to exercise all of their skills if possible, so that is where we concentrate our objectives."

For members of the Lincoln Ambulance, their first experience with SIM-MT lab provided an unforgettable experience.

Although the cardiac arrest training provided an unprecedented level of realism, it was the "live" birth exercise that had everyone talking.

"It's crazy because we've never had anything like this. I've never had a dummy screaming at you and then its pushing its own baby out. It worked just like we've trained for," Birkholz said. "It was simulated, but it was pretty dang live!"

EMT Ron Arambarri agreed "It was sure realistic. That was a $100,000 dummy. She talks to you, her skin feels real, the pulse, everywhere, the chest breathes up and down. Her eyes look at you. You check her pupils and they dilate for you. It's so realistic. She's screaming and yelling; when the baby comes out the baby's crying."

The scenario Ron's team faced was slightly different from that faced by the team his wife Lori was on. Where Ron's team had time to get an IV hooked up and to record vital signs every five minutes before delivery, Lori said her team had no time for any of that before the "baby" came.

"They do one heck of a good job with any kind of scenario you can imagine with childbirth," Lori said. "Fortunately, the ones they gave us were pretty straight on."

"They've never delivered a baby here in Lincoln for the ambulance, so you want that high acuity, low frequency type of call where there's a lot on the line," Verworn said.

The Arambarrii's said that as part of the training they also learned some interesting statistics about live births, such as that about 45 percent of births are breech, or feet first, and that nearly the same percentage have the umbilical cord wrapped around some part of the child's body. 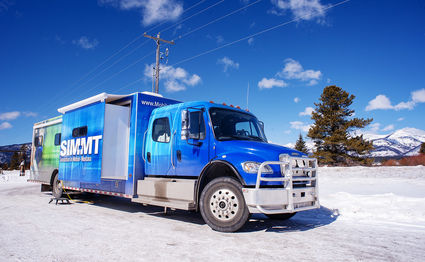 Birkholz said the quality and level of training provided by the SIM-MT lab isn't something members of the LVA see very often. "It's really hard for volunteers to be able to go off to Bozeman for a weekend and do hospital-based training. It's just super hard for volunteers to get to those, so when these opportunities come up, you've got to snatch them up."

"Every small community, if they have the opportunity to get that truck there, I think it would be in their best interest," Lori Arambarri said.

Although the cost of last weekend's training was covered by a grant, Birkholz hopes to have the training lab back to Lincoln in May. SIM-MT partially subsidizes training with rural EMS agencies, and the next visit will cost about $700. Birkholz said that will come out of the funding provided by the EMS mill levy passed in 2017.

Thanks to a generous donation from Rich and Donna Dengel and a grant from the Leona and Harry Helmsley Charitable Trust, 60 local EMS, RNs, Medical Assistants, Respiratory Therapists and ER physicians were recently able to take part in three days